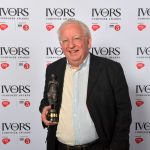 Edward Gregson has won the award in the category of original composition for ‘Amateur or Young Performers’ at The Ivors Composer Awards 2019, for The Salamander and the Moonraker – An Adventure Story in Music, which received its premiere in July 2018 at the Bridgewater Hall in Manchester, performed by the Hallé Orchestra and Children’s Choir.

“I am delighted to have won an Ivors Academy Composer’s Award for the Hallé commission premiered last year by their children’s choir and orchestra. Entitled ‘The Salamander and the Moonraker’, it tells of the adventures of a group of children caught up in a magical realm beyond earth, with a Salamander in tow to rescue the Moonraker from the clutches of the God Thor, and to restore the moonlight to earth.

It was a real joy to work on this composition with the Halle Children’s Choir, who brought such commitment to their music-making as well as a huge slice of talent: 30 minutes of quite difficult music to sing from memory, with added choreography, and with an orchestra in front of them, is quite an achievement.

I am particularly pleased that on this occasion of my winning an Ivors Composer’s Award for the first time it was the result of a creative partnership with my wife, Susan Gregson, who wrote the wonderful story, text, and lyrics.”

The Ivors Composer Awards recognise the creative talent of composers and sound artists to promote the art of composition in contemporary classical, jazz and sound art.

Since 2003, they have recognised exceptional talent in classical, jazz and sonic art composition. For the last 15 years, the awards were known as the British Composer Awards, but from 2019 they are The Ivors Composer Awards.

The Ivors Composer Awards are sponsored by PRS for Music. The event is in association with BBC Radio 3 providing exclusive broadcast coverage.

BBC Radio 3 will broadcast a programme dedicated to The Ivors Composer Awards at 9pm to 11pm on Sunday, 8th December.

The Salamander and the Moonraker (An Adventure Story in Music)