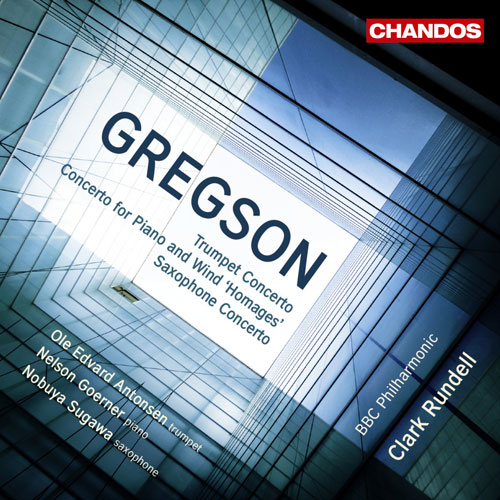 A champion of the concerto offers music that’s richly appealing … All three performances are outstanding, showing the bravura and sensitivity of the soloists and their complete integration with the orchestra and conductor, who directs with spirit and alluring, sensuous feeling. The recording is of Chandos’s demonstration standard and this collection cannot be too highly recommended.

Edward Gregson has made a speciality of concertos, and has a flair for exploring the character of the solo instrument in new and appealing ways. Ole Edvard Antonsen is a virtuoso soloist in the Trumpet Concerto, which boasts a deeply felt slow movement. The wide-ranging concerto for piano and wind is dazzlingly played by Nelson Goerner, but perhaps the finest work is the Saxophone Concerto, full of exciting tone colours and catering for Nobuya Sugawa’s amazing skills. Clark Rundell is the insightful conductor.

For the distinguished British composer, educationalist and academic Edward Gregson (b.1945) the concerto form has long stimulated his imagination and provided an excellent creative medium. His particular affinity for intertwining the soloistic potential of wind and brass instruments (but also strings, piano and percussion) into the larger orchestral tapestry is well documented, and his instinct for drama, colour and succinct effect is thoroughly constituted.

[The Trumpet Concerto] is full of jagged, lively short motifs that Gregson works so effectively into engaging paragraphs.  Something of a demonstration piece for the instrument, it also creates a world of mysterious beauty in its slow movement.

Written in 1983 for the distinguished trumpet soloist James Watson, Edward Gregson’s Trumpet Concerto has since become a staple part of the repertoire for any advanced performer and is perhaps the most widely known British concerto in the instrument’s literature.  From the outset, Antonsen and the BBC Philharmonic (under the direction of Clark Rundell) tackle the work with unquestionable vigour and intensity … In short this is the preeminent version of the Gregson Trumpet Concerto available on disc today, performed by a stellar soloist with fantastic accompaniment and great audio quality to boot.  For any serious student of the work, or indeed just a trumpet enthusiast, this is a must have in your collection.

The trumpeter Ole Edvard Antonsen plays two blazing quick movements with a zip around a morose testimonial to Shostakovich.  The pianist Nelson Goerner summons Rachmaninov, Bartók and Bernstein in a rudely exuberant work, while the saxophonist Nobuya Sugawa quotes Berg and hints at the Pink Panther with his misty, sore throat tone.  Rundell conducts with precision.  Gregson’s concerti – he plans one for every instrument – are already an exiting collection.