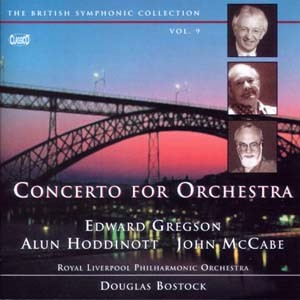 …Gregson’s Concerto for Orchestra is the most overtly brilliant of the three. Written in 1983 for the National Centre for Orchestral Studies, in a post-modern idiom, it is imaginatively scored and beautifully clear in sound and communicative power – the finale is very thrilling…I am happy to say that this new CD is outstandingly well conducted  and brilliantly played throughout. The recordings are excellent. This important CD deserves every success.

Douglas Bostock, in his continuing British Symphonic Collection,  has struck gold with these premiere recordings of three examples from the Eighties. Edward Gregson’s Contrasts [later re-named Concerto for Orchestra] defines the norm, being an extremely effective three-movement display piece along fairly conventional lines.

Gregson’s concerto dances like mad and sounds damned good besides. The score glitters, with special attention to brass, tuned percussion, and harp. Gregson works with rather edgy, angular, but memorable ideas. Everything holds together extremely tightly. In fact, the opening motive runs throughout all three movements of the piece. Of the three works here, I think this is the one that will catch up most people, because it moves so purposefully – indeed, almost as well as the Bartok….the finale is a corker, the most propulsive of the three movements, with rat-a-tat rhythms and ‘big-shoulder’ ideas in the brass. It should knock you out of your seat.