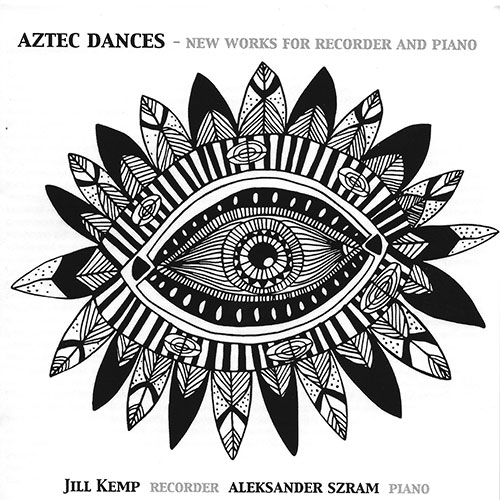 New Works for Recorder and Piano.

Although written originally for recorder and piano, Edward Gregson’s Aztec Dances (2010) may be more familiar in its alternate guises for flute and piano—premiered by William Boustany with Aleksander Szram in 2011—or as a chamber flute concerto, recorded by Chandos on a highly recommendable all-Gregson CD (CHAN 10822, with Boustany again as soloist). The music fits the flute like a glove but, as Jill Kemp’s lively rendition proves, so does it the recorder.

The inspiration came from the British Museum’s marvellous 2009 exhibition, ‘Moctezuma—Aztec Ruler’, especially the role music played in Aztec life and ritual. The opening ‘Ritual/Pastorale’ is static and solemn, succeeded by an invigorating ‘Fertility Dance’. The heart of the work, however, is the extraordinary ‘Ghost Song’, a disturbingly atmospheric invocation, running for almost half the length of the concerto, to the Creator god Tezcatlipoca, whose name is uttered twice. Tezcatlipoca was honoured by human sacrifices, and a barbaric ‘Sacrificial Dance’, with a nod to Stravinsky’s Rite, concludes the whole.

Edward Gregson’s Aztec Dances was written 2010 and commissioned by the recorder player Chris Orton. The work is in four movements, ‘Ritual/Pastorale’, ‘Fertility Dance’, ‘Ghost Song’ and ‘Sacrificial Dance’ and the original inspiration for the piece came from a visit by Gregson to an exhibition at the British Museum about Aztec civilisation, particularly a section on music and dance in Aztec. The result is a sequence of fascinating dances which weave more esoteric Aztec type sounds into Gregson’s own voice, utilising the recorder’s ability to sound primitive to great effect. The writing for recorder includes a number of extended effects, and in ‘Ghost Dances’ the recorder is played into the piano to utilise the resonance of the piano strings.