Edward Gregson enjoyed great critical acclaim at this year’s Presteigne Festival (where he was Composer-in Residence), held in the beautiful surroundings of the Welsh borders. 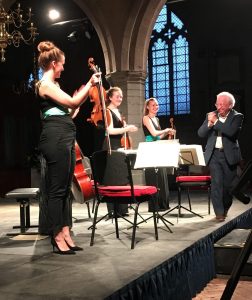 During the six-day event seven of his works were performed, including two world premieres: a new String Quartet commissioned by the Festival and written for the Nightingale Quartet, and a new version of his song cycle Five Songs of Innocence and Experience, performed by Rebecca Afonwy-Jones (mezzo-soprano) and Timothy End (piano).

The Festival is a wonderful celebration of musical performance and new commissions, but also on offer are interesting exhibitions and entertaining talks on music, literature and film. This year’s Festival goers were treated to an engaging conversation between writer, conductor and publisher David Wordsworth and Edward Gregson, talking about his life, his music and his influences.

Included in the three orchestral concerts were two Gregson works: Goddess for viola and string orchestra, which Rebecca Franks in The Times described as ‘ecstatic’ and a ‘stand-out moment’ (wonderfully performed by Rachel Roberts), and his serenely beautiful cello concerto A Song for Chris, performed in the final concert by the Festival Orchestra conducted by Artistic Director George Vass, with soloist Gemma Rosefield, whose ‘wonderfully layered and variegated account embraced the score’s many-sided approach to grief and loss, from violent outbursts to hushed acceptance’ (Paul Conway, Hereford Times).

Five Songs of Innocence and Experience

A Song for Chris - concerto for cello and chamber orchestra