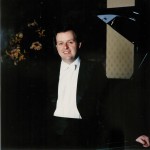 The BBC Symphony Orchestra will be performing Gregson’s Concerto for Piano and Wind (‘Homages’) at a Maida Vale Invitation Concert on Wednesday 6 January at 2.30pm. The piano soloist will be Ronan O’Hora, and the BBCSO will be conducted by Michael Collins (for whom Gregson wrote his Clarinet Concerto, and who is now forging an impressive career for himself as a conductor). The concert will be recorded for future broadcast on BBC Radio 3 in their ‘Afternoon on 3’ slot.

The sub-title of the concerto – ‘Homages’ – is a tribute to the various twentieth century composers whose piano concertos Gregson so admired when he was young (and still does!), particularly those by Stravinsky, Bartok, Rachmaninov and Poulenc. His intention was to write a concerto that would be taxing but accessible. The instrumentation of the concerto is almost identical to Stravinsky’s Concerto for Piano and Winds of 1924, with the addition of a soprano saxophone. The concerto is in three movements: Toccata, Passacaglia, and Rondo-Burlesque, and lasts some 20 minutes.

The concerto was commissioned by Berkshire Young Musicians Trust in 1995 and was premiered by the composer (piano) with the Berkshire Youth Wind Orchestra, conducted by Robert Roscoe. The work was substantially revised in 1997, and dedicated to John McCabe, who gave the first performance at Lancaster University, with the Royal Northern College of Music Wind Orchestra conducted by Clark Rundell.

Concerto for Piano and Wind (Homages)